Overview
Discover the magic and fascination of the central desert in Iran with this amazing 10 days tour Iran desert Tour and Isfahan city tour .
This package is intended to take you to the Kavir-e-markazi or Iran central deserts to visit the most famous and beautiful places in this region and unique natural attraction like Kavire Mesr ( Mesr Desert Tour ) , sand dunes, salt lakes and steppe-like plains with date trees and camel flocks are one of the Iran most interesting historical cities like Isfahan , Kashan and Abyane . ( Isfahan Tour )
There is also several historical caravansary which strategically located along the ancient, camel-trodden trade routes and the scorched salt flats of Kavir-e-Markazi which most of them would be visited .
We will also follow the history of old abandoned routes and villages to the four main central cities of Iran. We will understand why Tehran, Kashan, Abyaneh and Isfahan are so different cities in the terms of culture, architecture and even language

Highlights
• Visiting Rig-e Jen, one of the world's most pristine deserts which has not been crossed by human until 1993 by 4x4 vehicle .
• Safari , camping and trekking in the heart of Desert
• Visiting beautiful desert villages of Iran deserts with their distinct history and stories
• An attractive journey through the ancient Persia, exploring its old civilization
• Visit Main historical Places in the Center Of Iran like Isfahan ( Isfahan City tour )
• Spend the day in Isfahan exploring Imam square and it's mosques ( Isfahan City Tour )
• Wandering through the Kashan ( Kashan city tour )
• Visiting few oases such as Mesr and Farahzad ( Mesr Desert Tour )
• Off-road driving by 4x4 vehicle in the desert
• adventurous route through rocky gorges and over dunes

Arrival at Tehran Airport (usually after midnight) where you will be met by our representative and taken to your hotel. Depending on the arrival time, we have the opportunity to explore the Golestan Palace in Tehran and take a short walk in the city

Your Iran desert Tour would be started today , After a Breakfast and check out heading toward a pleasant oasis town of Kashan and on the way we will have stop in the residential and recreation complex. Then continue to the small city named Ab- Shirin on the side of the Central Cesert Of Iran . Passing trough the Ab-Shirin we will arrive to the central desert of iran and visit Namak Lake ( Salt Lake ) and Old Caravansary named MaranJab. We will have a lunch in the caravanserai and head toward a Aran and BidGol City to Visit to the underground city Named NoushAbad or Oei . This is 3 Level Underground City belong to 1500 years Ago .
Finally we would have the night in the beautiful old prepared Eco-Lodge

Inthe second day of Iran desert Tour and Isfahan City Tour , After having a breakfast and check out we will go for a Kashan Cultural Visit with its marvelous merchant houses and one of the country’s most famous gardens, The Fin Garden. The most beautiful houses of wealthy merchants are close together in the west part of the town. You can visit beautifully-decorated rooms with colored murals and amazing stained glass windows in the Tabatabi house or nearby in the Abbasi house. The Brujerdi house, the Samovars merchant, has a pretty garden and the most beautiful frescos from the hand by Kamal al Molk, a famous Iranian artist. Nearby is one of the finest Hammams (baths) in Iran . Hammam–e Sultan Ahmed Mir that features multiple rooms of beautifully-colored tiles. You can see the magnificent view of Kashan from the roof of the building .
Visiting the beautiful Fin Garden is the highlight of the city. There is also a small bazaar, and don't miss the beautiful caravanserai and tea house . ( Kashan city Tour )
We will stay a night in the one Of the Kashan Hotel or Ecolodge .

in the forth Day of Iran desert tour and Isfahan City tour , After having a breakfast and check out we will driving for few more hours you will arrive in Abyaneh, a beautiful mountain village located at the foot of beautiful mountain of Carcass which exist from 2500 years ago. In this village the living is still traditional . for example buidling architectural all are in red clay and Women here are dressed in colourfull cloths and long white floral scarves. The mosque inside a city is with its wooden mihrab also would be visited. For sure you would like to have a beautiful photo and you can go via steep paths and climb up to the ruins of several castles and enjoy a splendid view of the town.
We will stay a night in the one Of the Abyane Hotel or Ecolodge .

In the fifth day of iran desert tour and Isfahan tour ,we should head toward a main central desert of Iran named Rig – De Jen .
After a breakfast and check out we will go toward a rig – De - Jen . One of the world's most pristine deserts which has not been crossed by human until 1993 . ( Mesr desert Tour )
one the way we will pass naeen and visit main mosque of the Naeen and Naeen Cultural and anthropology Museum . The interiors of the Pirnia manor house from the 15th century give a good impression of the grandezza of the old merchant families. The Jame Mosque here is one of the oldest mosques in the country and dates back to 10th century. Nain is also famous for its textiles .
Your next stop is the beautiful oasis village of Anarak and finally we will go in to the Rig De Jen and Having a Camp there .

After Having a breakfast in the Camp we will continue our way through a Desert Dunes and road to Mesr Village . ( Mesr Desert tour )
Rige De Jen is part Of Dashte Kavir . The Dasht-e Kavir is a rather flat desert, determined by huge salt pans. we will explore this landscape on foot before continuing through the Mesr Village . ( Isfahan desert Tour )
Today also you have a full day to enjoy the silence and vastness of the desert. You will have the option of riding a camel through the sand dunes. After lunch you can rest for a while and then continue to explore the area.
We will stay a night Ecolodge in the Mesr Village and have traditional dinner there .

In the last day of iran desert tour in Mesr Desert , after having a breakfast in the ecolodge we would go toward a Jandagh City to Stroll in the cisty narrow garden style alleys , visit a city museum and we will return back to the Eco lodge for the lunch .in the afternoon we will go toward a Kavire Mesr to visit spectacular place in the desert which is canebrake inside the desert and then head to Oasis Aroosan to see the beautiful sunset in the heart of the Desert and finally returning back to the EcoLodge .
We will stay at the Ecolodge for the night and have a dinner there.

our Isfahan city tour is going to be started from this day . After having a Breakfast , we will go toward a Isfahan City and on the way we will visit Varzaneh City . This City is famous for its women , where all the women wearing a white Scarf . in the city there is beautiful Qurtan Castel . Then we will reach to the Isfahan City .

Today is dedicated to isfahan city tour , Full city tour of the beautiful city of Isfahan, the 17th century capital of the Safavids, referred to as Nesf-e-Jahan (Half of the World) in Safavid sources, to visit the famous monuments and historical sites ending up in to the Qeisarieh Bazaar with hundreds of shops displaying the art and handicrafts for which Isfahan is world famous, overnight stay at hotel.
Simple at first glance but wondrous in its rich detail and bold design, the Masjed-e Jamé is another masterpiece of Iranian architecture, covering nearly 5 acres in the heart of this historic city. This is one of the oldest congregational mosques in the country, and its construction and embellishment over the past twelve centuries illustrate a number of important periods in Islamic architecture.

This afternoon, your exploration continues in Imam Square. This 17th-century site is one of the largest public spaces in the world. Here in the square, you’ll visit the 17th-century Shah Mosque, revered as a masterpiece of Islamic architecture and easily recognized by its magnificent tile-work and soaring cupola and minarets. In the Ali Qapu Palace, you’ll marvel at its beautiful music rooms and the balconies where Safavid kings would sit to enjoy the polo matches unfolding in the square below. You’ll end your day exploring the Qeisarieh Bazaar that surrounds Imam Square. With hundreds of local vendors that specialize in traditional arts and crafts, it’s a wonderful place to shop for pottery, enamel, jewelry and delicately inlaid board games.

Next up is Chehel Sotun. Set in a landscaped and forested park in front of a tranquil reflecting pool, this graceful pavilion was built by Shah Abbas II for entertainment and court receptions. Entering through a portico with twenty slender wooden columns, you’ll discover soaring halls embellished with frescoes, paintings and mosaics; the Hall of Mirrors is especially breathtaking!

Coming Back to Tehran by train or dedicated Car and depend to time of departure to International airport . 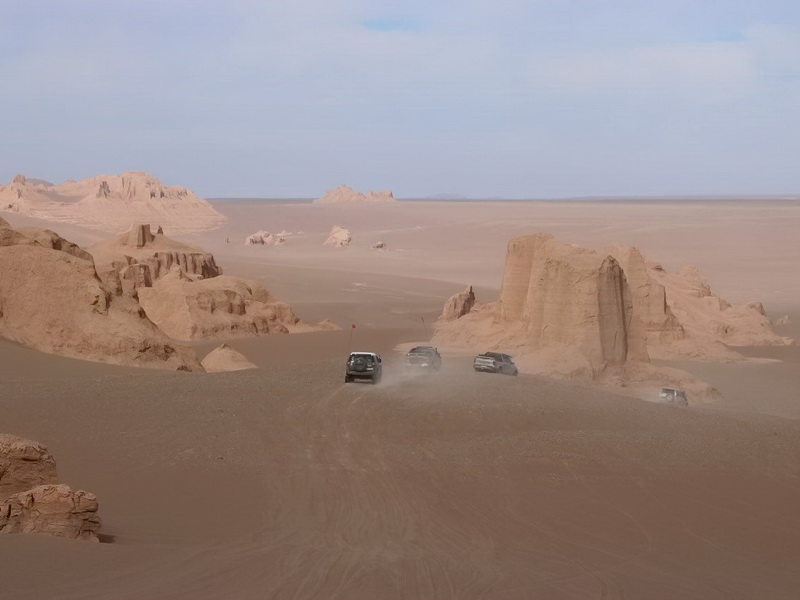 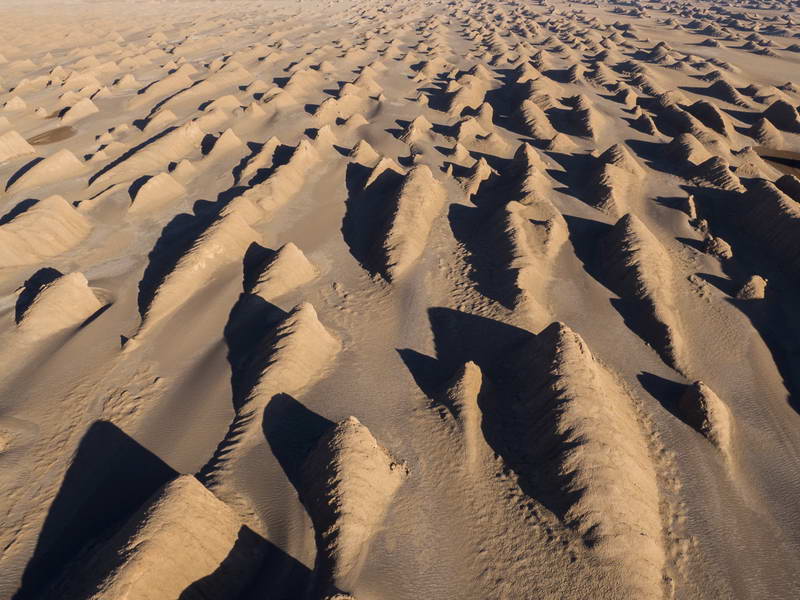 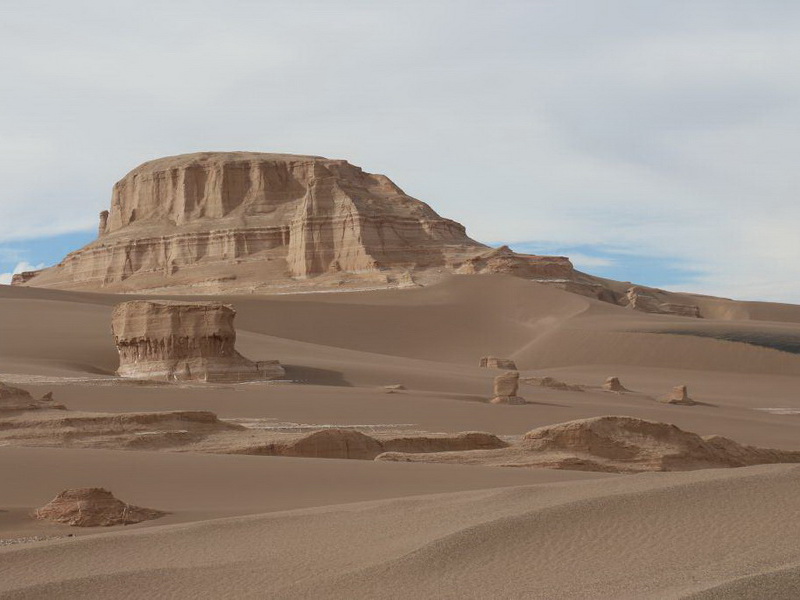 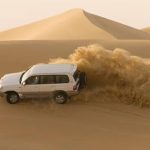 Two of the world’s most pristine deserts in Depth 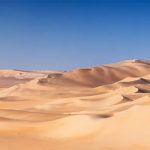